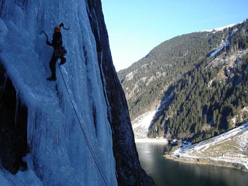 Long and serious icefall which offers some of the finest ice climbing ever. Watch out for falling ice on pitch 3. Exact timing is crucial for a successful ascent as ice seldom forms along the entire line. Do not underestimate the length of this very vertical icefall.Due to the large amount of water in the reservoir, Swami Prem Darshano and his climbing partner Hanspeter Schrattenthaler decided to row across to the Krönung icefall in their boat. In the middle of the lake they suddenly noticed the boat had a hole... with a bit of luck - while one paddled frantically the other bailed the water with his helmet - they managed to reach the shore. By no means disheartened, they returned a few days later to do battle, but after 150m of vertical ice they were forced to give up beneath a massive ice curtain. They called the icefall 'Die Krönung', the coronation, and the route was eventually first ascended in its entirety by Andreas Orgler and friends. Since its first ascent in the '90's, the route has received under a dozen complete ascents.

Drive along the Zillertal to Mayrhofen, then continue past the Ahornbahn to the Gasthaus Lacknerbrunn located in the Stillupgrund.

From Gasthaus Lachnerbrunn walk up the valley along the road to the dam. Keep right along the wall of the dam and continue along the righthand lake shore to the icefall. (1.5 hours)

COMMENTS for the route "Krönung"

No comments found for Krönung 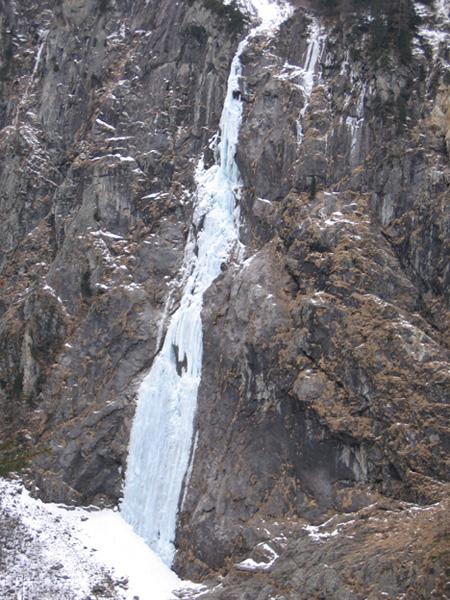