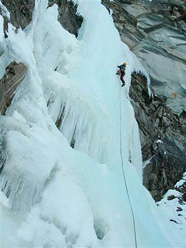 The magnificent Valle di Tures still conservers its typical South-Tyrolean charm, far-removed from the modern city stress. The valley as an ideal background to Franziskus, the icefall which is marked by a first steep section and it's two drips, which is followed by a short gully which leads to a fun second steeper section. A slightly easier line can be climbed to the left.

From Brunico in Val Pusteria, drive towards Valle Aurina. After Campo di Tures (Sand in Taufer) turn off into Valle di Riva towards Riva di Tures.

Park the car in the Franziscus car park located circa 1km after Pension Tobelhof on the road which leads to Riva di Tures. The icefall is visible from the carpark. Continue up the road on foot and bear off right after the bridge onto the gravel track. This leads to the base of a gully after a few hundred meters. Scramble up this to reach the base of the icefall (40 minutes).

From the final steep section, equipped with bolt belay, descend for 60m then traverse right for 50m to reach a tree with slings. A 60m abseil leads to the base.

COMMENTS for the route "Franziskus dx"

No comments found for Franziskus dx 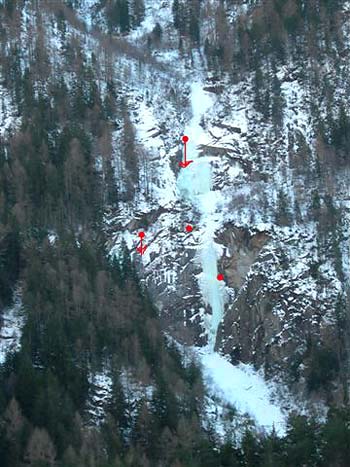