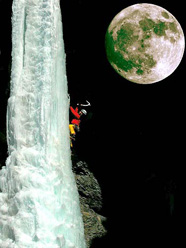 Splendid free-standing drip, unfortunately rather short and with a long walk-in. Alternatively, it can be reached by climbing either Shining Ice or Red Bull and then traversing south to the base of this drip.

The drip is clearly visible from the car park high and to the right of the unmistakable Corno di Brusadella. This nice ice pillar seems as if it holds up the entire large rocky cave, before finishing on the slope above. Walk past the gully, cross the river and ascend to the right (hydrographical left), first up through the pine trees, then directly up the long wide slope directly to the col beneath the summit of Corno Brusadella. Circa 100m beneath the col traverse right (S) and enter into the gully to reach the icefall (1,10/1,30 hours)

A short 10m initial wall (can be avoided) leads to the rocky cave and the main drip. This is climbed in one 30m pitch.

Descend on foot down the slope on the hydrographical right