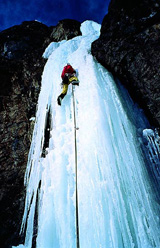 Very beautiful drip. Carefully analyse the thickness of the ice and, given its orientation, the temperature!

From Livigno drive to the border at Ponte del Gallo; after driving past the icefall Dardaglin on your left and driving through a long tunnel (the fourth) park by the bar Il Fopèl. The icefall is clearly visible on the rocks behind the bar, and is easily reached via the small gully. Depending on the season, the climb starts up a nice 10/12m free-standing drip (not visible from the car). This obviously avoids the first boring section of the walk-in (30 mins).

Climb up the first drip (if formed) and continue to the large wall and the second 50m pitch. This is comprised a 10/12 m high vertical icefall, followed by an easier angled section and a 12/15 m finishing drip.

Abseil down bolted belays to the right

COMMENTS for the route "Fopel"

No comments found for Fopel