The mixed climb Illogika takes a line to the left of Couloir dell’H on Monte Nero di Presanella (Adamello - Presanella). An old peg was found on pitch 2, at present it is unclear whether it belongs to an old attempt or to a summer route. According to initial research it seems to belongs to the route established in July 1964 by S. Calzà, G. Emanuelli and R. Mandelli.

According to the first ascensionists 'We progressed easily, pro was sufficient. We climbed across open terrain and up fantastic gullies. The 4th pitch was perhaps the most difficult, it started with a leftwards traverse towards the icy slabs, then continued up a fairly steep gully for a few meters that didn’t accept much pro (we recommend you place a good peg here!).

Pitch 5 proved a bit spicy, too, even if the protection was somewhat better; after a long traverse right in continued up a narrow, vertical gully with excellent ice. Towards the end of the pitch it continued rightwards to a corner, past some frozen turf that reminded me of my origins in the Spanish Pyrenees.

The climb continued up other beautiful pitches, always up frozen gullies. We were even spoiled for choice, just like last year on the north face of Monte Pelf in the Dolomites! At the end we joined the north ridge of Monte Nero, from here we climbed one more pitch on easy mixed terrain to the summit at 3344m.'

Descend by abseil via  Diretta solitudine or reach, just before the last pitch, the col exit of Couloir dell’H, then follow the recommended descent of this route. In order to repeat IllogiKa you’ll need a set of Cams up to blue BD (2 x medium sizes), 3-4 pegs and slings for the spikes.

Most of the pitches were 60 meters long. We left a peg on the traverse on pitch 4 and several slings on spikes, used for protection or for belays.

COMMENTS for the route "Illogika"

No comments found for Illogika 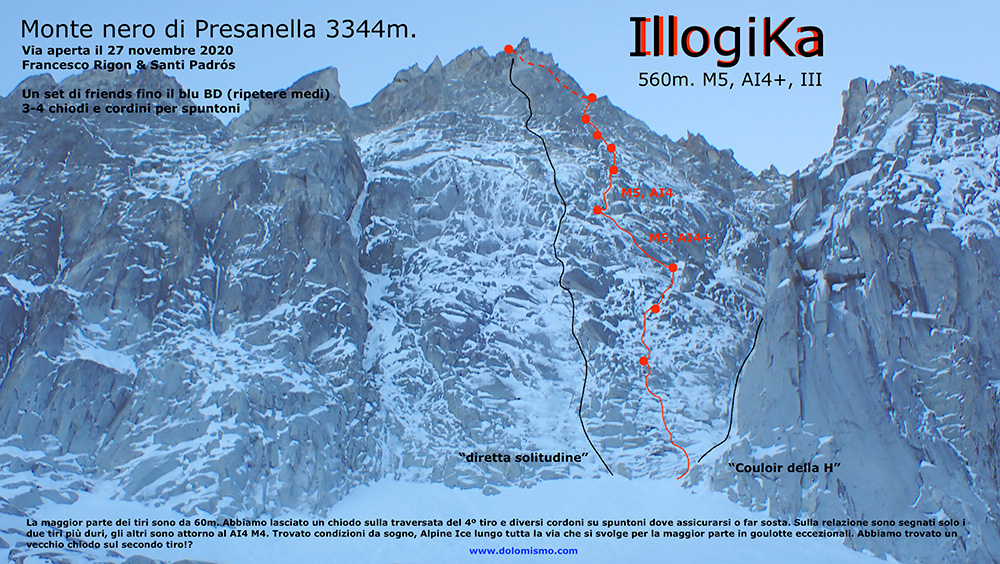