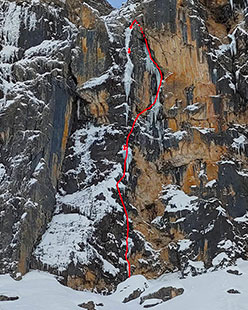 Beautiful modern mixed route on Torre Murfrëit close to Passo Gardena in the Sella group, established by Santiago Padrós and Giovanni Andriano over two days, on 17 and 19 December 2019. According to Padròs this is one of the most interesting routes of its kind in Dolomites.

Equipped with bolts and pitons, it neverthless requires mountaineering skills and ability on placing trad gear! The route was established with the use of aid on the 17th, and freed two days later. Bolts were added on day 2 to make the climbing safer and more fun.

Ironman is located at the lower part of Torre de Murfreit (close to the Gardena Pass), faces NW, and starts at an altitude of 2100m. The route can be seen clearly from the road and is reached in just 15 minutes on foot.

1 abseil: 30m. Abseil carefully diagonally down to the left, the belay is on the lip of the couloir
2 abseil: 45m. Abseil to the route's second belay. Take care: clip some bolts on pitch 3 to reach the belay more easily.
3 abseil: 55m.

COMMENTS for the route "Iron Man"

No comments found for Iron Man 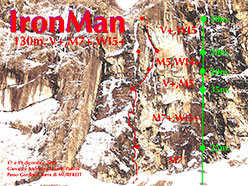