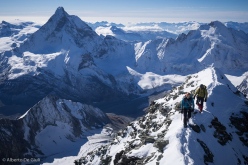 Dent Blanche is a beautiful mountain in Val d'Herens, in the canton of Valais in Switzerland, a pyramidal summit reached by four rock and snow ridges. The normal route that leads to the 4357m high summit is the South Ridge, also known as the Wandfluegrat, a beautiful alpine crest that can be compared to the Hornli Ridge on the Matterhorn. The Wandfluegrat is much more pristine, with only a handful of insitu pegs and bolts placed only where they are absolutely necessary, and some ring bolts in the gully to the left of the Grand Gendarme.

In Val d'Herens then there are no ski lifts and the beautiful Cabane Rossier hut is reached via a 5-6 hour walk and a 1600m altitude gain.
The normal route up the South Ridge cleans up very quickly after snowfall and climbing it at the end of the season is a real pleasure for those in search of tranquility and splendid autumn colors.
The ascent and descent times are similar to those on the Matterhorn, 4/5 hours ascent and just over 3 hours descent for a party that is quick at doing rope manoeuvres and that doesn’t get slowed down by others.

Follow the road up through the valley, park just before the end at the side of the road and before road closes to through traffic (you may be fined if you continue).  Walk quickly up to the dam from where the path leads in 1.45 hours to Bricola. From here continue on up to Cabane Rossier by following the path across the Glacier su Manzettes (cairn and wooden markers indicate the route through the moraine). Cross the glacier reach the beautiful Cabana Rossier hut at 3507m. 5 / 6h walk from the parking lot.

Follow the tracks behind the hut up the rocky ridge (cairn) past some steep grade II scramble that lead to a short but exposed airy section across rock to 3620m circa, from where a snow slope (40° max) leads to Wandfluecke, 3703m. 45 min.

From here head north on the glacier and follow the snow slope that leads to the first rocky ridge (boulder and track, grade I and II) and then to a first col at 3907m. Continue along the snow ridge (watch out for cornices on the eastern aspect), past some easy mixed climbing towards the end to reach the base of  Grande Gendarme.
From here traverse 20m circa (leftwards, facing the mountain, past 2-3 bolts) to reach the snow gully (often icy). Ascend this then cross slabs to the right, negotiate the short vertical section and reach the col on the ridge, above the Grande Gendarme (60m, grade III scramble, 4 long ring bolts for belays and rappels). Alternatively, climb directly up the Gran Gendarme, 4 short pitches, max IV, insitu pegs.
From the col above Gran Gendarme continue past good quality rock along the crest and climb past the next 4 gendarme (III max, ring bolts at the belays, some bolts at the most difficult sections. At this point if conditions allow (ie hard-packed snow) it is possible to zigzag up easier terrain on the east face
From the 4th Gendarme traversa left (some bolts and tat) and then continue past the beautiful steep corner and small roof (grade III+, 3-4 bolts) to reach the ridge above the V Gendarme.
From here follow the beautiful snow ridge, past the occasional rocky section, to reach the final, exposed knife-edge ridge that leads directly to the summit. From the Grande Gendarme 2 hours circa. 5-6 hours from Cabane Rossier.

Descend down the ascent route, simul-climbing and with abseils where necessary on the steepest sections. 4-5 hours

40m rope is sufficient (50m if you want to be on the safe side), 4 quickdraws and some small and mid-size camming devices. Normal ice climbing rack.

Take care when crossing and descending the snowy gully next to the Gran Gendarme; danger on falling rocks if this is crowded.

Cabane Rossier (3507m) remains open even out of season. Although without the hut warden, the entire hut is open, not just a cold winter hut. There are plates, pots, and wood for the stove, to melt snow and warm the hut. Just remember to keep things clean and tidy, and pay for the overnight stay using the CAS envelopes and the strongbox.