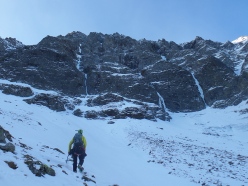 From Zell am See drive towards Mittersill, then follow the Felbertauernstraße road to Wolframkehre (180° hairpin bend). Park close to the barrier. (1025m)

In winter the road to Lake Hintersee is officially closed, but sometimes cleared of snow to Wolframstollen or the lake. If there is no snow, a mountain bike or e-bike reduces the approach time to just 1 hour! Follow the road for 4km to reach Hintersee and then continue up valley along the marked path (917A) until this leads left away from the river bed. Continue up the river bed to the base of the climb.

Big ice and mixed climb up the NE Face of Hochbirghöhe. The first 200m offer gentle WI4 climbing. Climb straight up the snow slope (watch out for snow conditions) past two short steps (WI2). After 5 steep pitches the first ascentionsits trended leftwards for a further 3 pitches to reach the gully again. Now follow the easiest line past M3 70° ice to the the summit.

Either descend on foot into the Hollersbachtal valley or abseil down the line of ascent. All rock belays are equipped. Descent circa 3 - 3,5 hours.

Full ice climbing rack, 1 set of friends and nuts, a selection of pegs and hammer. 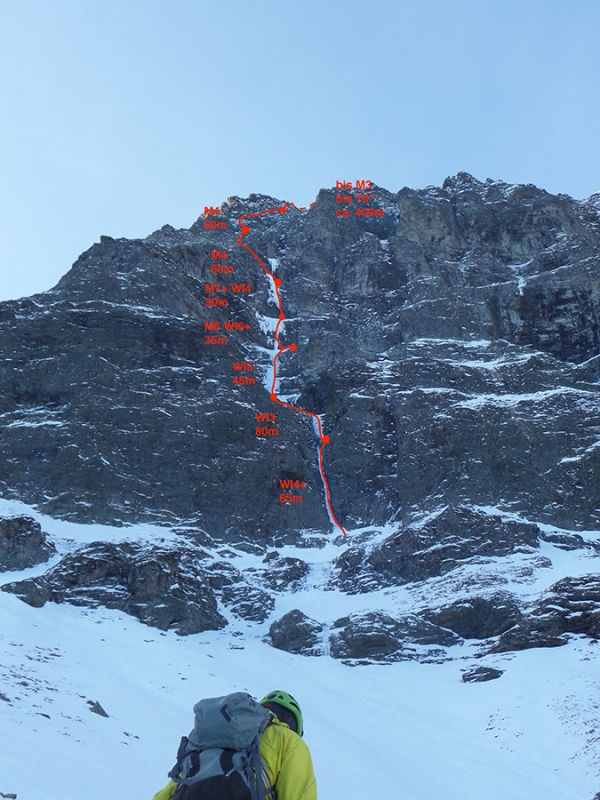 Professional climbing knife for work at height and rescue situations....