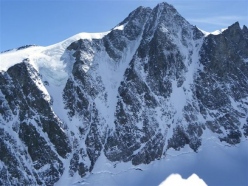 The first ascent of the Pallavicinirinne in 1876 marked an important moment in the   history of alpinism and the Pallavicini Coloir is the first and also the most famous route up the North face of the Grossglockner. Facing Northeast, it receives the early morning sun and is more dangerous than the Mayerlrampe. In any case it is one of the most impressive mixed climbs in the Eastern Alps.

1) From Munich or Verona via the Brenner motorway, exit at Bressanone. Drive through the Pusteria valley to reach the Italian-Austrian border. Continue from here past Lienz towards Heiligenblut to reach the Glocknerstrasse. After the toll station continue along the beautiful mountain road to the car park.
2) From Munich to Salzburg, then continue south to Bischofshofen. Leave the motorway here and drive through the Salzachtal to reach Fusch. From here take the Glocknerstrasse, after the toll station follow the the beautiful mountain road to to the car park.

From the Glocknerstrasse car park take the path down to the Pasterze glacier. Walk NW along the Pasterze glacier to where this joins the Glocknerkees glacier. Be careful as this glacier is full of big crevasses! Ascend this up the 45° slopes on the right, between the glacier and the northern ridge, to reach the Biwakschachtel bivy located on the North Ridge Glocknerkamp at 3205 metres. Note: the bivouac hosts max. 10 people. During the North face season (April, May, June, September, October) it is often overcrowded! At the bivy check out the rest of the route during daylight, as the start the following day is carried out in the dark!

Start very early the next morning. Ascend a dozen or so metres, then descend SE to reach the  Pallavicinirinne Bergschrund (about 1h). The first 100 metres are very narrow and exposed to falling rocks and consequently this section has been nicknamed Kanonenrohr, cannon tube. Ascend this quickly and continue up the 400m 50° - 55° snow (or ice) slope. The final 100 metres to the saddle between Kleinglockner and Grossglockner offer rock or mixed climbing and the difficulties vary depending on conditions from grade IV+ rock to M5 mixed! There are 5 bolts in these last three pitches that lead to the col. A final 10 minutes of grade II-III° scramble lead to the 3798m high summit.

Descend down the normal route.

COMMENTS for the route "Pallavicinirinne"

No comments found for Pallavicinirinne 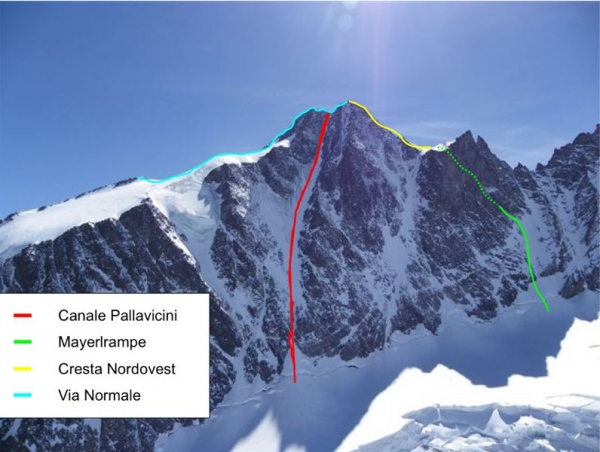