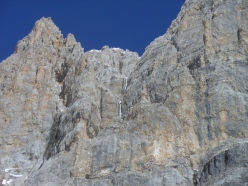 Beautiful ice and mixed climb in fantastic surroundings, with a spectacular view onto the  Grostè pistes and then, on the summit, the view down into the enchanting, wild Val di Tovel.

The ice gully comes into condition almost every year after a period of thawing followed by a cold spell (March – April). The climb is demanding above all due to the lack of pro.

We feel we cannot provide a grade due to the changing conditions of this type of climb. Future repeaters should note that we climbed circa grade 6 ice with precarious mixed and poor pro.

Rifugio Graffer is an ideal starting point. From the hut ascend the the obvious gully which breaches the first rock barrier.

From the summit continue along the crest towards Passo del Grostè (west) to reach the col from Cima dei Colombi, A 55m abseil onto the west face (red rope) leads to the snow slope which leads to the Vidi path. From here traverse east to the starting gully- Descend this to reach the hut. 2.30 hours. 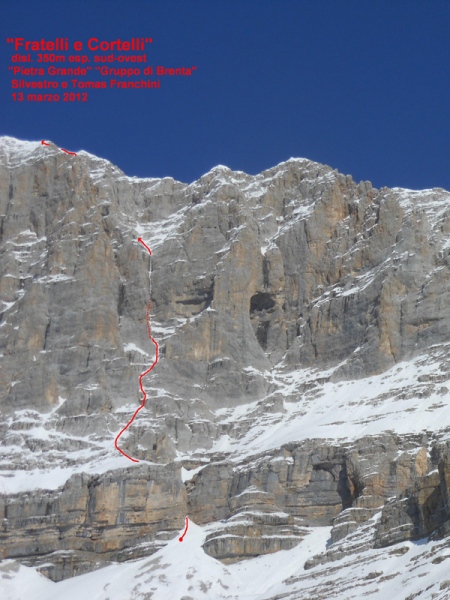