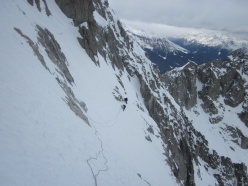 Demanding mixed route established in winter which breaches demanding sections of mixed rock and ice in search of the line obvious line of weakness in a wild and solitary environment. The route requires stable snow conditions and a long cold spell which reduces the danger of rock fall.

From Rifugio Segantini head towards  Bocca d'Amola to beneath the face, ascend the slope at the base to reach a large buttress which blocks the view onto the starting gully. Scramble left past to reach the gully, circa 60m high, 50°. The route starts at the base of the first vertical rock band and climbs to the left of the Via delle guide established in September 1949 by G. Alimonta, Bruno abd Catullo Detassis, S. Serafini and N. Vidi.
If the road is closed at the start of the hairpin bends calculate 3 hours to reach the hut, and a further 3 hours to reach the start of the route (times vary according to snow conditions, we recommend snow shoes).

P1: 45m Short corner and crack on the left (M4) followed by easy snow traverse right to reach the corner which leads to the ridge, peg belay a few m to the left of the corner.
P2: 55m Climb right to reach the corner, enter this with a difficult M5 crux and continue up M4 to reach snow and the crest on the left which leads to the wedged block. Belay with camming devices.
P3: 50m Ascend the steep snow slope via mixed climbing (M3/4) to reach the obvious corner with wedged block, peg belay.
P4: 60m Traverse right, past a peg, to beneath the large block, climb the corner (three A0 moves on using Friends and M5+) then ascend snow to a jutting block, belay, 1 peg removed.
200m Reach the central ledge and traverse left for 200m (max 50°-60°) to reach the obvious corner-gully system. Belay with camming devices to the left of the corner.
P5: 55m Corner and cracks (friable) 20m M4+, then snow and mixed terrain, peg belay to the right of the final corner.
P6: 60m Delicate climbing followed by hard moves (M5) lead to a narrow gully. Peg on the left at the end, then exit right and straight up to final cornice.

From the top of the route reach the summit via easy terrain in 10 minutes, as well as the nearby  Orobica bivouac. Recommended descent via the Passo dei quattro Cantoni, calculate 3 -4 hours.

Route established in 9 hours after a bivy at Rifugio Segantini and spending a night at the summit in the Orobica bivouac. 550m (6 pitchs +200m snow slope).

COMMENTS for the route "Alice in Wonderland" 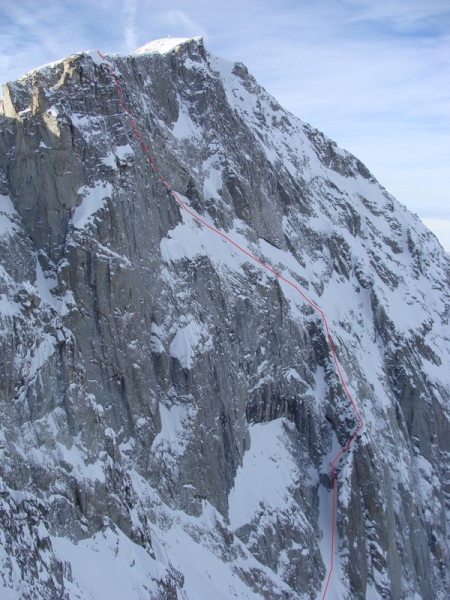