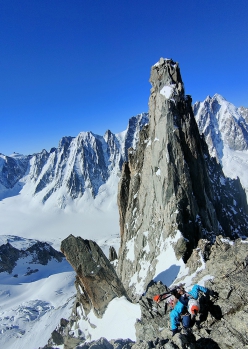 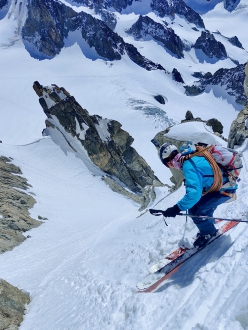 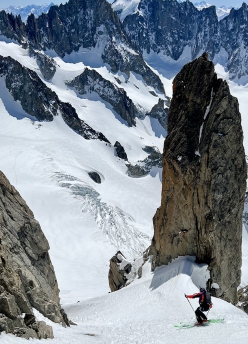 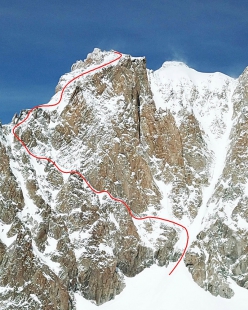 On 17/04/2022 French alpinists Tom Lafaille and Aurélien Lardy skied what is likely to be a new line down Aiguille d’Argentiere in the Mont Blanc massif. The descent has been called Les Vires du Jardin.

On Sunday 17 April 2022 French mountaineers Tom Lafaille and Aurélien Lardy completed what is likely to be a complex, new ski descent on the South Face of Aiguille d’Argentiere in the Mont Blanc massif.

The pair approached the line a few days earlier but turned back right at the start due to heat and, changing tactics, returned to spend the night on the Argentiere Glacier in order to make the most of the refreeze. They set off at 6:30 am and reached the summit at 11:30 before dropping in, down the line of ascent.

The descent can be spilt into three distinct sections: the top of the classic Jardin Ridge, followed by an 80m section of mixed terrain which opens onto 4 suspended, hidden ramps that, in turn, lead to the final 50 meters of the famous Couloir en Y. The pair had to take their skis off only to down climb the 80m section, while they wisely chose to play it safe and make a 30m abseil at the end of Couloir en Y.

Aurélien Lardy is an extremely gifted skier while Tom Lafaille is an aspirant mountain guide and the son of Jean-Christophe Lafaille, one of the most talented mountaineers of his generation who tragically lost his life while attempting to make the first winter ascent, solo, of Makalu in 2006.

After their descent on Sunday Lafaille junior stated "We couldn't find any info on this route, we therefore propose the name "Les Vires du Jardin"! It was an incredible moment of suspended exploration, with the void under our skis and a grin on our faces."