► News ► Interviews ► Corrado 'Korra' Pesce, from No Siesta to Cerro Torre. The interview and meeting with Rolando Garibotti 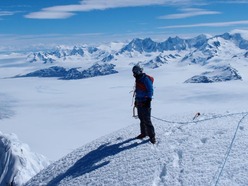 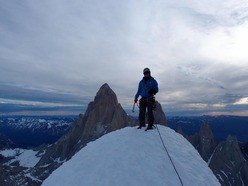 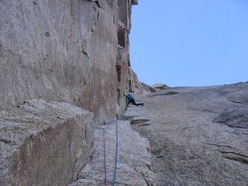 PORTFOLIO / gallery Portfolio: Corrado 'Korra' Pesce, from No Siesta to Cerro Torre. The interview and meeting with Rolando Garibotti

Corrado 'Korra' Pesce, from No Siesta to Cerro Torre. The interview and meeting with Rolando Garibotti

From the North Face of the Grandes Jorasses to Patagonia. Corrado "Korra" Pesce's alpine journey, introduced by Rolando Garibotti in this meeting and interview - from one alpinist to another - in El Chalten

Corrado “Korra” Pesce’s name recently jumped in the news with impressive repeats of No Siesta and the Desmaison routes in the North Face of Grandes Jorasses, as well as repeats of the Ragni route on Cerro Torre and of the Aguja Standhardt to Punta Herron traverse. He was born in Novara in 1981 and has lived in Chamonix since 2004. Hardly anyone knows him in Italy and even Planetmountain mistakenly reported him as being French... He is one of the most active climbers in the Mont Blanc massif today. He started climbing in Piemonte, when he was 18 years old and fell in love with the mountains working in Capanna Margarita and in Rifugio Torino.

Jeff Mercier has been one of his big influences and together they have done countless routes, always trying to climb free, routes such as Omega on Petit Jorasses, the north face of the Dru in winter, No Siesta, etc. His many outings in Mont Blanc include soloing the Droite’s Jackson route and down climbing the Ginat to arrive in time to pick up his daughter at kindergarden.... In Canada he has soled classics such as Polar Circus, Suffer Machine, Ice Nine, Lower Weeping Wall, and climbed with partners routes like Sea of Vapors, Curtain Call, Terminator, etc. Also in Europe he took care of climbing the classics, routes like the north face of the Eiger, north face of Matterhorn, Colton-McIntyre, Divine Providence, the Freney Pillar, etc.


With a repeat of the Ragni route on the West face of Cerro Torre and a repeat of the Aguja Standhardt to Punta Herron traverse your recent trip to Patagonia was a great success. How did the idea to come to Patagonia come about?
Swiss Michael Lerjen-Demjen asked me to come to Patagonia with him. It was an invitation that was hard to refuse. Our objective was the Torre Traverse but unfortunately we did not get a long enough window to make a serious attempt. To familiarize ourselves with Cerro Torre we decided to climb the Ragni route, an incredible line with ice formations like I had never seen before. Passing over the col Standhardt to the Icecap carrying only a 30-liter backpack was rather intimidating, but the route was superb, never too hard, always interesting. The Elmo pitch took me 3 hours and included a short fall... The mushrooms require some getting used to...
Two weeks after the Ragni route we climbed Standhardt via Exocet, descended to the col dei Sogni and climbed Spigolo dei Bimbi on Punta Herron. We had hoped to keep going but the weather made us turn around. Spigolo dei Bimbi is an incredible route, one of the most beautiful I have ever done, very remote and in a very serious environment. I was really motivated to keep going, to Torre Egger and then onto Cerro Torre, but that was not to be. The descent from Herron via Tobogan was very complicated and involved. We were very happy to get off.

Will you come back for another attempt on the Torre Traverse?
Yes, sure, it is such a great line. I hope to be back next year for another attempt. Patagonia is an incredible playground, with many inspiring lines. Of course the weather is the big problem and one is always forced to climb very fast to have a chance to succeed. The terrain in Patagonia is very similar to the Alps so I found myself at ease here. The rock on Spigolo dei Bimbi for example is not unlike Grand Capucin so I could run up the pitches feeling like I was back home. It felt good. This was my first trip to Chalten and after these two climbs I am “hooked”, addicted so to speak. I am definitely coming back!!!

What was different in Patagonia from the Alps?
The approaches, they are so long, one must really like walking in Patagonia! Also, because of the incredible shape of these towers reaching the actual summits is a lot more important than in the Alps. Local climbers like Colin Haley make a clear distinction between ascents and attempts. Recently he climbed Cerro Pollone to reach a point less than one meter from the summit and he called his ascent an attempt. This is a more “honest” and clear version of alpinism than what we are used to in the Alps.

You are best known as an ice and mixed climber and alpinist. Why the interest for those aspects of climbing?
After working for a number of years in mountain huts in 2003 I started climbing on north faces and ice-climbing. The winter of 2004 I went to Canada for 5 months, to the Banff area. I bought a car and traveled around doing a lot of soloing and finding partners wherever I could. I find waterfall climbing completely fascinating. I spend a lot of my time waiting for the right conditions to climb what I consider the “perfect lines”. I am a collector of waterfalls and have enjoyed traveling across the Alps to climb all the best-known ones. This year I hope to go to Norway, where it seems like I might find many of the perfect lines that I am so inspired by.
In Canada I also discovered mixed climbing and returning from that trip I met Jeff Mercier who at the time was the mixed climbing (dry) guru in France. He took me under his wing and taught me a great deal. While sport mixed climbing is good fun and good training I don’t consider it as an end in itself. It is a limited and rather contrived activity often involving chipped holds. I got discouraged pretty fast so in the last years I have changed my focus to trying to apply those mixed climbing skills to the mountains. “Real” mixed routes like “Mach 3” in Kandersteg or the many routes in Fer a Cheval are some of my favorites.

You have lived in Chamonix for many years, how did that come about?
In 2002 and 2003 I started working there part time and finally settled there in 2004. In 2008 my daughter Leia was born there and that same year I started the guides courses at ENSA. It was easy to be drawn to Chamonix. There is so much energy and so much mountaineering history there. It is an easy place to be inspired by.

Not too many Italians do their guide courses at ENSA?
No, it is true. For me it was in part a matter of convenience because I was living there, but also I was motivated by the fact that so many great climbers from the 80s and 90s work there as professors, people like Michel Fauquet, Francois Marsigny, Bruno Sourzac, Alain Ghersen, etc. I draw a lot of inspiration from people, especially in situations as “intimate” as the one at ENSA.
This year I passed my Aspirant Guide and was able to start working in the mountains. The guide courses have taken me longer than expected because I have always preferred to go climbing rather than train for a guide exam. To reach the necessary ski level I had to train for an entire winter that meant very little climbing. Being a guide is something I have wanted to do for quite sometime now. I am looking forward to have a long career. It is a profession I greatly enjoy.

For years you worked at Snell, the well-known mountain shop in Chamonix.
Yes, indeed, I worked at Snell for seven years and from Chalten to Kathmandu I run into people that recognize me from there. I found it very interesting to be able to advise people on their choice of gear and have enjoyed working with companies to make lighter and better performing equipment.

You have climbed a lot of routes in the north face of Grand Jorasses, including No Siesta recently.
Yes, eight different routes so far, but I hope to climb many more. It is by far my favorite face. It is a very varied face, with some of the most serious terrain in the Mont Blanc massif. Jeff Mercier and I climbed No Siesta this past September. It took us three days. Ours was the first repeat since March of 2009. Obviously we were interested in climbing it free following the precedent set by Robert Jasper. We had four days of good weather so we could afford to take the time to climb it in good style. The hardest part was following, having to climb hard pitches with a heavy haulbag in the back and with marginal belays.
Ten days after No Siesta American Peter Mason and I climbed the Desmaison also on the North Face of Grandes Jorasses. For years I had wanted to do this route, partly because of the rich and dramatic history behind it. Many of the repeats of the Desmaison had been done in fairly heavy style, taking 4 or 5 days. We were lucky to have very good conditions and managed to climb it in a day and a half. It is similar in difficulty to No Siesta, a little less sustained but much longer.

Where do you draw inspiration from?
Inspiration to go to the mountains comes from many fronts, but it often comes from other climbers. Being in the mountains I often feel in touch with the climbers that have passed before me. On Punta Herron, a tower that has seen less than a dozen ascents I couldn’t help but feel the presence of Ermanno Salvaterra and the many other climbers that have written its history. If today we can climb as fast and as hard as we do it is because we are standing on the solid steps laid by those that came before us. Having deep knowledge of mountain culture and history is something that has always helped me, something that I find essential.

Korra Pesce would like to thank Kayland, Adidas and Petzl for their support.