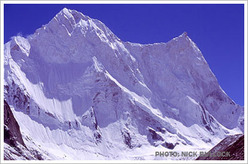 They had set off with the idea of also climbing Changabang (6866 m), the famous mountain located in the India's splendid Nanda Devi National Park. But before attempting this peak, they opted to climb a new route up the highly sought-after North Face of nearby Kalanka. This beautiful 6931m high mountain tested them to the limit, so much so that after their ascent they returned directly to Japan. The decision proved a good one, since their ascent was not only nominated for the 3rd Piolet d'Or Asia, but also proved victorious in Seoul last weekend.

The three Japenese mountaineers are called Fumitaka Ichimura, Yusuke Sato and Kazuki Amano and are 30, 27 and 31 respectively. They reached base camp on 30 August and soon established ABC at 5100m. After having climbed the lower section of the wall they set off on 16 September for their summit bid; bad weather pinned them down for three long days at 6600m and the three finally summited on 22 September after having climbed 1800m of technical mixed terrain estimated at M5. Their ascent was obviously carried out in alpine style and the undertaking is noteworthy, both due to the style in which it was carried out and due to the history of previous attempts.

Mount Kalanka was first ascended in 1975 by a Japanese team led by I. Tanabe. Two years later the first ascent of the North Face was carried out by an expedition from the Czech Republic led by F. Grant. The Czech climbers hoped to climb a direct line up the central buttress but this proved prohibitive and they opted for the col located between Changabanf and Kalanka, reaching the summit via the normal route. The North Face saw action last season at the hands of Nick Bullock and Kenton Cool, who attempted the face for the first time in alpine style. The strong English climbers retreated from the shoulder as the ridge proved unjustifiably dangerous.

Fumitaka Ichimura, Yusuke Sato and Kazuki Amano's successful September summit comes in the wake of experience gained on Alaska's difficult faces, which no doubt helped them through the difficult bivvy 300m below the summit and down the problematic, unknown and unprepared descent.

The Jury of the third Piolet d'or, presided by Riccardo Milani from Italy, certainly recognised and chose toreward the ultra-light and clean style of the Japanese mountaineers, as well as their ability in resolving problems independently. It has to be said that the other ascents in the running for the Asian Piolet d'Or were impressive to say the least, such as Denis Urubko & Boris Dedeshko's climb up Eigth Women-Climbers Peak (6110m) and the Korean expedition led by Kim Se Joon up the North Face of Meru Peak (6660m).

Congratulations to the three Japanese mountaineers therefore (and their alpine style) who now add their names to the roll of honour of the previous two editions: Denis Urubko and Serguey Samoilov for the NE Face of Manaslu (8163 m) and Shim Gwon-Sik, Kang Yong-Sung and Jo Min-Sua for the W Ridge of Garmush (6244 m).