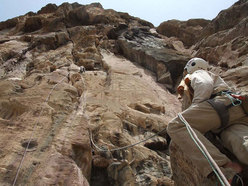 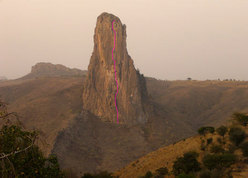 In February 2007 the Italians Massimo Faletti, Mario Cavagnini and David Rigotti made the first ascent of "Malaria" on the Rhumsiki Tower in the north of Cameroon, on the border between Nigeria and Chad.

The new route is called "Malaria" (for obvious reasons) is 340m long, graded 7b A2 and tackles 7a+ obligatory climbing. It takes a line between two existing routes previously climbed by a French team and an American/South African team. The tower is liparite, a crumbly basalt and the Italians backed up the belays with bolts. They feel the route can go free, but were thwarted due to high temperatures.

The expedition wasn't all plain sailing though, as Massimo Faletti reports from a land in need: "the impact with central Africa is never the easiest. Cameroon is another country largely exploited by us westerners for gold, wood from the virgin forests and even petroleum extracted from the marine platforms.

All this meant that the local population was a bit... angry with our world and consequently with us. The journey proved to be long and highly adventurous. At times the policemen were nothing more that any old civilian with a Kalashnikov wanting some money. Here we heard talk of highway robbery and cannibalism. And the people starve to death or die of diseases which could be cured, where missionaries and nuns are in the front line and the people smile and celebrate despite their problems of survival and despite living in total misery."