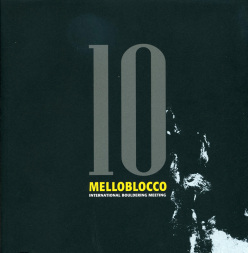 Melloblocco 10, the book that retraces the history of the international bouldering festival which, ever since 2004, has taken place in Italy's Val Masino Val di Mello.
Photo by Melloblocco

Photos, texts, stories and meetings of the first 10 years of Melloblocco: the book that retraces the history of the international bouldering festival which, ever since 2004, has taken place in Italy's Val Masino Val di Mello.

The year was 2004, and 300 gathered in Val di Mello - Val Masino. This was the first international bouldering meeting. At the time no one could have guessed, but Melloblocco had just been invented. A small, great phenomenon driven by the love for climbing and nature. Over the years, one edition after the next, Mello has become a reference point for thousands of climbers worldwide.

The world's best and passionate climbers alike met year-in year out in this valley of wonders. And so this true alpine garden, with its forests, granite rock faces, thousand-year-old boulders and "hypnotic" waterfalls witnessed the games played by the thousands of young and even younger climbers. Perhaps the valley smiled at their energy. And perhaps it also learnt to love them. What is certain is that for everyone Melloblocco transformed into an unmissable, annual appointment.

This book celebrates a decade of meetings, excitement, sporting performances but also the wish for a community and friendship found in the Val di Mello Nature Reserve, the largest protected area in Lombardy. Melloblocco is revealed here through numerous beautiful photos and texts which, year after year, helped confirm this outdoor climbing meeting as the most popular and famous in the world.