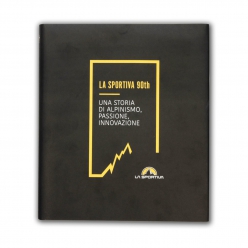 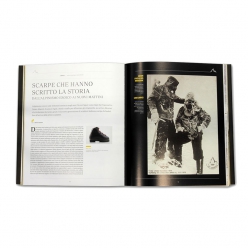 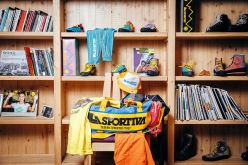 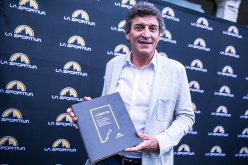 The book 'La Sportiva 90th, a history of alpinism, passion, innovation' celebrating the first 90 years of the famous Italian outdoor footwear and clothing company is now on sale at www.lasportiva.com.

The Fiat 242’s diesel tank is full and it is parked in the company’s forecourt of the building at Tesero, ready to leave. Bardonecchia is far away, on the opposite side of the Alpine arc and looking at the map trying to understand where the watershed dividing Italy and France is, Valle Stretta seems beyond the border. Ah. France! The French seem to have invented high-level climbing, they have Verdon, Buoux, Patrick Edlinger and Patrick Berhault, the EB climbing shoes and even Mont Blanc. They have the magazine Vertical. The difficulties of the routes are measured in French grades and the sixth seventh and eighth grade no longer exist. They are now graded 6c, 7b, 8a. The French are French, they are strong. But we have the Dolomites. And Manolo.

As well as purple and yellow Mariacher climbing shoes. The magazine Alp has just been published, climbing is exploding in Arco and Finale Ligure, at Sperlonga, everywhere in Italy and then at the end of the day half of Mont Blanc is even ours. Ww only suffer from a slight inferiority complex, but the first climbing competitions in the Western world will be held in Italy, in a few days’ time Sportroccia 1985. The La Sportiva shoes are better than the EB shoes. Bardonecchia is near France, but it is in Italy.

This is how the it all begins according to Lorenzo Delladio, twenty years old at the time and now managing director of La Sportiva, in the book "La Sportiva 90th, a history of alpinism, passion, innovation" that celebrates the 90th anniversary of the historic outdoor footwear and clothing company from Valle di Fiemme, Italy

The book delves into the modern history of climbing and mountaineering by analysing the evolution of this historic market leader, and the volume won the the prestigious OMI Award 2018 as best corporate monograph for its innovative approach and storytelling. Numerous star climbers and mountaineers have their say, such as Reinhold Messner, Manolo, Simone Moro, Adam Ondra, Alex Honnold, Tommy Caldwell, Hansjörg Auer, Nalle Hukkataival, William Bon Mardion, Angela Eiter, Michele Boscacci and many others. This is clearly a one of a kind volume that not only celebrates the first 90 years of La Sportiva, but also the unprecedented success of an Italian company in the outdoor industry.

Curated by Emilio Previtali, the book is on sale now directly from www.lasportiva.com