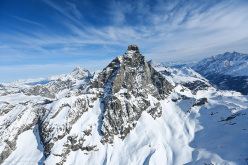 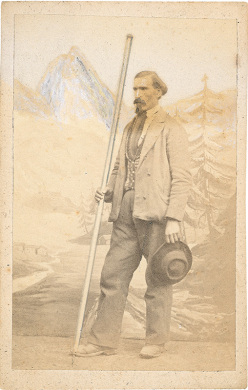 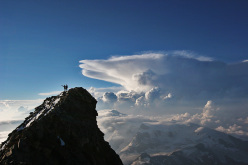 Grazia Fenu on the summit of the Matterhorn, 4478m.
Photo by Hervé Barmasse 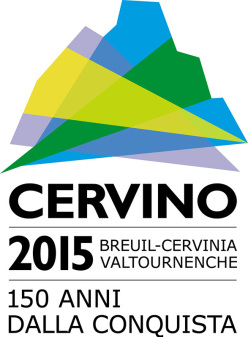 Matterhorn Cervino 150, the great history of alpinism and the 150th anniversary celebration

From 10 to 19 July 2015, the Matterhorn, Valtournenche and Valle d'Aosta invite everyone to take part in the ten-day celebration of the 150th anniversary of the legendary first two ascents of the mountain. Mountaineering events and outdoor activities, mountain walks, theater, music, dance, cinema, theater and literature events have been organised to celebrate the great mountain , the epic achievements of its cavaliers Jean-Antoine Carrel and Edward Whymper, and all those who followed in their footsteps to make the Matterhorn and alpinism legendary.

At 14:30 on a radiant Friday, Edward Whymper and his six fellow adventurers stood up there, as if suspended in mid-air. There was nothing left to climb. Above them only the immense sky while, all around, the view stretched out towards infinity. No one had ever reached this point before. It was the 14th of July 1865 and the Matterhorn, the beautiful and impossible mountain, had finally been "conquered". An achievement in absolute terms. Yet Whymper hardly rejoiced. First he had to make sure that he really had won the "race", that he really was the first person to have reached the summit. And so he rapidly made his way to the opposite face, to the Italian side of the mountain. He was looking for Jean-Antoine Carrel, the other major protagonist of this story, who was guiding a group of mountaineers who had set off from Breuil on 11 July, just three days earlier. Only Carrel, the marksman, the man from Valtournenche who more than any one else believed in this ascent, only he could have beaten Whymper. He needed to know the truth, immediately!

The mountain seemed lifeless. Then the Englishman caught sight of them: the seven Italians were still there, tiny dots in the distanance. He tried to call them, to attract their attention. They simply had to hear him! They had to see him on the summit. But to no avail. Then he threw some stones down into the void. And finally they noticed him. They glanced upwards, silent and evasive. Perhaps they cursed. Then they turned around and began to retrace their steps, started the descent. Whymper watched them disappear from view and thought that that man should have been up there with him. Yes, Jean-Antoine Carrel, the bravest and most experienced, had really deserved to reach the summit. He had attempted it 14 times, even with Whymper. And even on that day they should have climbed together, but right at the last minute they parted ways to make that ascent that proved decisive.

Carrel had tackled the mountain via its south face. From the Italian side. The more difficult face. Whymper on the other hand had climbed the Swiss face, starting from Zermatt, via a new route that somewhat unexpectedly had proved easier. That is how the Englishman had won. And now he was celebrating the successful summit together with his climbing partners. There was not a breath of air. Not a cloud in the sky and the whole world unfolded beneath them, wonderfully… They were happy! This story could have ended here, and what a great story it would have been. Could have, had it not been for the fact that this was the Matterhorn, the mountain of mountains. And had not fate, as cruel as it is unexpected, reserved a sequel worthy of the most fervid imagination.

Whymper and his companions had begun the descent. Experienced guide Michel Croz led at the front. He was followed by the young Douglas Robert Hadow. Then by expert Charles Hudson. Then Lord Francis Douglas. And team was completed by the guide Peter Taugwalder, Whymper and, at the end, Taugwalder’s son. It only took a fraction of a second. Probably it was Hadow who slipped... and that was the end! Hadow, Croz, Hudson, Douglas, one after another, were swallowed into the void. No one managed to stop anyone from falling. Not even the rope, tied desperately around a boulder by the two Taugwalders, managed to halt them. That thin rope, that final hope on which the four unfortunate mountaineers hung, failed. Broke, xxxx Snapped, leaving the remaining three companions alive, alone and shattered. Suspended above a 1000m drop, the same one into which the others had just disappeared to forever.

Immense joy and immense tragedy, all in the blink of an eye. A terrible blow from which they would never recover. Completely distraught Whymper and the two Taugwalder barely managed to descend back down into the Valley, to Zermatt. They shouldered an extraordinary victory and, at the same time, the biggest defeat of all. And furthermore, soon they would have to endure the infamous accusations of having cut the rope to save their own lives. But that’s going too far ahead… the story hasn’t finished yet.

While all this happened, on the other side of the mountain Carrel and his companions had returned to Valtournenche. They were greeted as winners. But instead, they had to confess that those figures at the top were those of Whymper and his climbing partners. The bitterness for not having been the first was immense, for everyone. And even though no one knew about the tragedy that had occurred during the descent, nobody wanted to hear another word about the Matterhorn. So much so that the representatives of the newborn Italian Alpine Club, that had been behind the failed summit bit, immediately tried to organise a new attempt but were flatly received by all. Only Carrel did not seem to have enough. But he did not want to try again with climbers who weren’t up to it. The others had been too slow during the last attempt!

In short, for Carrel his relationship with the mountain couldn’t stop with this defeat. And the same holds true for Abbé Gorret, the soul and spirit of the valley. It was he who encouraged the others, who told them that the mountain represented their valley. That they had to try again. That it was they who had to climb it. They who breathed the same air of the Matterhorn. And so on 16 July four of them set off. They were the best, and they soon proved it! On 17 July Jean-Antoine Carrel and Jean-Baptiste Bich summited their Cervino, the Matterhorn. While Jean-Augustin Meynet and abbé Gorret waited slightly lower down, where they had lowered their partners into the gully that had paved the way to the summit. This was a great example of teamwork, but also true intuition that resulted in the first Italian ascent of the great mountain and, at the same time, the hardest route ever climbed. What remains to be said is that only on their return to Valtournenche did the four find out about the British tragedy… A tragedy that weighed heavily on Whymper and Taugwalder for the rest of their lives. For his part, Carrel continued to work as a guide and died in 1890, as a true hero on the Matterhorn, having rescued his client in a terrible storm.

The impossible mountain, the beautiful Matterhorn, in just four days had been climbed twice, from two different sides. In addition, the Italian route was the hardest climb in the world. Those achievements opened the doors of the future and at the same time marked the end of an era, that of Age d'or of mountaineering, the Golden Age of alpinism. 150 years later those days and those men remain etched in memory with their stories that, like all true epics, are now legendary. And, at the same time, they represent a true synthesis what mountaineering is, has been and perhaps will be. This is why the story of the first ascent of the Matterhorn is memorable, just like all the stories and climbs that were subsequently played out on the legendary faces of the mountain of all mountains, the Matterhorn.

LINKS
- Consult the online calendar of events
- Packages: the conquest of the Matterhorn