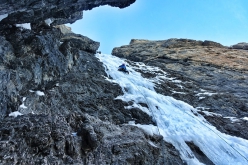 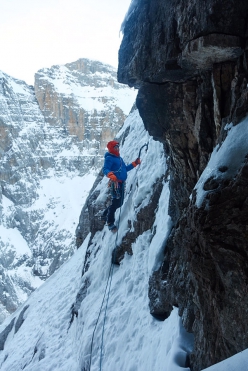 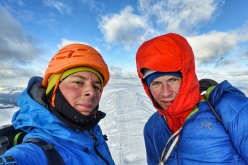 Fabian Buhl and Luka Lindič on the summit of Cima Tosa, Brenta Dolomites, having made the first ascent of Sau hladno!
Photo by Luka Lindič, Fabian Buhl 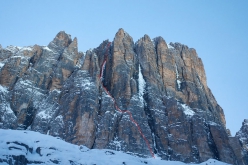 Just a few days after his first visit to the Brenta Dolomites, Slovenia’s Luka Lindič returned to the mountain massif in Northern Italy to capitalise on the amazing conditions that these mountains are currently in. The 30-year teamed up with Germany's Fabian Buhl in order to climb a route he had noticed with Ines Papert a few days earlier. This ascends a "logical and classic line" via a series of ramps to the right of Selvaggia Sorte and to the left of Tomas Franchini’s 2014 solo creation Elfo del Brenta up the Pilastro Antonio e Piera.

Lindič and Buhl - who had never been to the Brenta before - had intended on sleeping below the mountain, but ended up spending the night at Baito Brenta Alta and then completing the approach early the next morning. Lindič told planetmountain.com "I’d spotted the line while climbing the mountain with Ines and it seemed like another very logical route that was just screaming to be climbed. You can even see the upper ice pitches really well from the road at Madonna di Campiglio. The first few pitches follow an obvious ramp/chimney system that brings you to the base of a beautiful streak of alpine ice on the steep headwall. Just like Selvaggia Sorte, the climbing here is of very good quality. Never extremely hard but sometimes not easy to protect."

Lindič and Buhl have climbed together in past, notably in Patagonia where they ascended the Italian route up Aguja Saint-Exupery (Gino Buscaini, Lino Candot, Silvia Metzelin, Walter Romano, Silvano Sinigoi, 1968 and the Anglo-Americana up Aguja Rafael Juárez (Martin Boysen, Paul Braithwaite, Leo Dickinson, Dan Reid, Rick Silvester, 1974), but never before have they endured such cold conditions. Lindič explained "It was so cold that we almost gave up below the wall on the approach. Strong winds made the low temps really hard to handle. Luckily though when we were finally on the route we were relatively sheltered. Nevertheless, all day we climbed as if we were dressed for the Himalaya…"

Local expert Tomas Franchini believes this is a new route. Called Sau hladno!, difficulties check in at AI6, M5. Lindič, who has now visited the Brenta group twice in less than a fortnight, concluded: "I’ve been thinking about climbing in this mountains for years now, and even bought a climbing guidebook. Bad weather at home in Bavaria and good conditions in the Brenta finally prompted me to go. It really is a very nice place and I’ll certainly be back. And not only in winter."