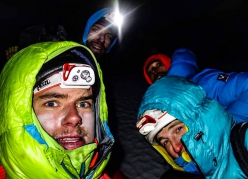 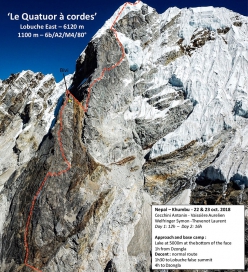 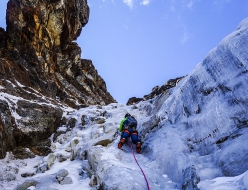 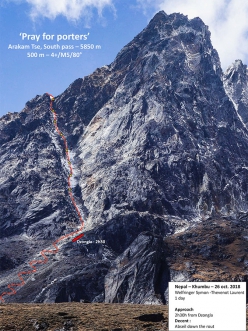 Last October French mountaineers Aurélien Vaissière, Antonin Cecchini, Laurent Thévenot and Symon Welfringer travelled to Nepal’s Khumbu valley for their first time. During this visiti to the Everest Region they spent two weeks acclimatising around base camp at Dzongla (4800 m), climbing Lobuche (6100 m) in five days in preparation for the main objective of the expedition, Mount Cholatse.

Conditions on the north face of this 6443m peak however were far too dry and, while searching for an alternative, they noticed a "tremendous rock pillar, 1100m high, leading straight to the summit of Louche East." Two big days of 12 and 16 hours each led them past one bivouac along the pillar and up the SW Face to the summit. The new route is called Le Quatuor à cordes, breaches difficulties up to 6b rock, A2 aid and sustained M4 mixed, and is located circa 500 meters to the east of Night Terror, established in 2010 by Joel Kauffman and Jared Vilhauer.

After their first ascent Welfringer noticed a line on nearby Arakam Tse (5850m). Welfringer explained "In the distance I saw a white line that seemed to be a beautiful gully, a few days later we went to take a look and we were hugely surprised when we discovered a line of ice hidden behind a massive pillar. After around 600m of scrambling up loose rocks we started up the interesting part of the route, several pitches of M5 and grade V ice to reach the south col of Arakam Tse at 5850m."

Looking back on their trip, Welfringer told planetmountain.com "This journey was our first experience in Nepal and we had so many good times there, meeting awesome people and discovering some of the most beautiful mountains on the planet. We have to return as soon as possible."