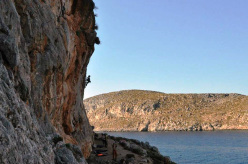 Climbing at Kalymnos: The Beach
Photo by Gianmaria Strinati 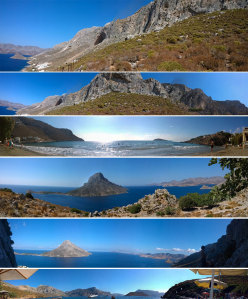 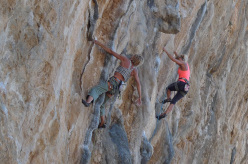 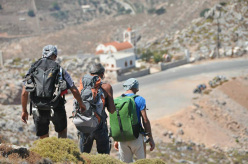 Return from the crag Prophitis Andreas
Photo by Gianmaria Strinati

PORTFOLIO / gallery Portfolio: Kalymnos, climbing on the island of Neverland

Kalymnos, climbing on the island of Neverland

Nicoletta Costi and Nicola Noè recount how Kalymnos appears towards the end of summer 2014. An island seemingly made for all the climbers in the world

It's the best part of the day, a cool beer in the shade, staring blankly into the sunset at the outline of Telendos. No sunset resembles another. Like paintings at an exhibition.

It's the hot season, the season of short sleeves in the middle of the night on a scooter, of water that draws you in, magical and magnetic, of long and countless dips after having climbed all day.

The noisy, joyful scooters indicate that there is no off-season for climbing on this island. There's a constant coming and going of colorfully dressed climbers, invariably sat in two on the comfortable saddles (if not in three, with toddlers), rucksack stashed between the legs of the driver, another worn by the passenger, rope stowed away beneath the saddle. All of sudden this vision takes me elsewhere, this "incessant" noise resembles another one I know all too well, with exactly the same ingredients of sea, beach and crags... the longtail boats at Phra-Nang!

As they make their way down the high street, on their return from a day's climbing, the families of climbers group together again. The youngsters from a while back are now fathers who take their babies to the beach, for an afternoon's swim, when the sun's rays are less powerful. Island regulars mingle with new arrivals. In their eyes there is no longer the twinkle of a secret place, which only they knew about and had the key to, but a kinder look of climbers who share the same vertical playground that, year after year, becomes even bigger and better. The feeling of being "exclusive" has now given way to that of "inclusive".

The island has grown considerably in recent years, has become better at welcoming climbers, always with the its hallmark simplicity and hospitality, but with less suspicion and better organised. The exhausting journeys with absurd connecting flights at Athens that forced you to spend a night at Kos are things of the past, regular buses ferry take you from the airport to the port and little boats speed across from Mastichari to Pothia, the island's capital. The improvised and at times unpleasant rooms have transformed into decent lodging, albeit relatively frugal. The bars and restaurants, closed off season during those early years of "Kalymnos the sponge divers' island", welcome people who flock in spring and autumn to "Kalymnos, the island of sponge divers and climbers." All of this is contained in the documentary produced by Marco Preti and presented at the end of April at the programme Geo & Geo, that examines the island as a whole, where climbing is an important, but certainly not only, ingredient.

The recent calm seas have ensured that the sediments have settled, the water from the cliffs high above looks clearer than every before, a palette of shades of blue, from light blue close to the coast to cobalt blue where it drops deep. The contrast with the barren strips of arid land that plunge into the water is stark, just like the grey, white, orange and black streaks of rock.

Sitting on the beach, beneath the shade of the Tamarix trees, waiting for the miracle: the dolphin pair that fish along the coast between Emporios and Arginonta. But its a half-miracle and we rarely catch sight of them. We eat simply, there's a wooden table, paper tablecloth, large portions, Mithos, the sea lapping just a few meters away, calm, dark, illuminated by the stars that lead off to the horizon, the Milky Way shining brighter and closer than ever before.

This island seems like the dream of a happy child, simple and carefree.

by Nicoletta Costi and Nicola Noè

For information about Kalymnos we recomend:
Kalymnos rock climbing in Greece by Planetmountain.com and, of the many other sites, climbkalymnos.com
The most popular guidebook is that by Aris Theodoropoulos climbkalymnos.com/guidebook. Click here for the new routes update.