► News ► Alpinism ► Jeef, the route and the beauty of climbing in Bavella, Corsica 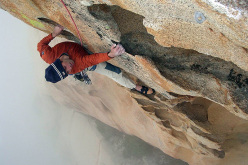 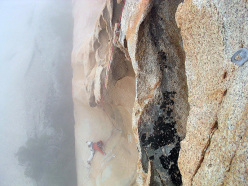 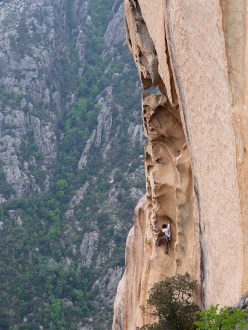 PORTFOLIO / gallery Portfolio: Jeef, the route and the beauty of climbing in Bavella, Corsica

Jeef, the route and the beauty of climbing in Bavella, Corsica

In praise of climbing and nature's beauty. This is Jeef, the route first ascended in 1992 by the French brothers François & Arnaud Petit on Punta U Corbu in Bavella (Corsica). A small masterpiece, examined by Maurizio Oviglia and Arnaud Petit.

A few days ago I climbed Jeef in Corsica's Bavella and once again, 8 years after I first repeated it, I said to myself this really is one of the most beautiful rock climbs in Europe. I know the concept of beauty is highly subjective and making claims of this sort is often risky, as for some beauty goes hand in hand with difficulty (theirs, as it happens...) while for others beauty is linked to the style of the ascent, or other factors such as aesthetics, rock quality and the environment. I belong to the latter category and I'd therefore like to point out that Jeef isn't that difficult nor is it ethically perfect (while it was established ground-up, some feel less bolts could have been used...) but it is certainly a cut above the rest in terms of rock quality, beauty of the line, the ambient...

Jeef was first ascended back in 1992 by the brothers François and Arnaud Petit. At the time they were talented climbers but rather inexperienced in the mountains, used to holidaying in Corsica with their parents. They certainly didn't imagine that they'd succeed, with their very first route, in forging an absolute masterpiece of aesthetics and beauty. But while many great routes stem from the experience and skill of the first ascentionists, others are simply the result of logic, of that "divine" series of holds that lead up an apparently unclimbable rock face. Jeef is certainly among these. The tafoni, cracks and small holds draw a fantastic diagonal line to the top of Punta U Corbu, past immense, smooth granite slabs. An obvious line that had remained untouched until two 20-year-olds decided to give it a go...

Three tafoni that dreams are made of (Arnaud Petit)
While climbing to the top of Teghie Lisce the year before the first ascent I noticed the line of the route and, as is often the case, there was one particular section that made the project particularly interesting! In this case there were three magnificent tafoni located beneath a small roof. Perfectly rounded and located one above the other, they seemed relatively easy to climb. I was dying to check them out for myself ... After a year's wait due to university studies I finally got to give it a go with my brother during the summer holidays. We made short work of the first pitches up solid, weathered granite and when we reached the roof we discovered that the tafoni offered some enormous holds, just as we had imagined! It was one of those moments where you feel privileged, where what you imagine transforms into reality! This was my first experience of establishing a route ground-up and it was evidently unforgettable! And that was more that twenty years ago!

Jeef, a granite masterpiece... (Maurizio Oviglia)
I've rarely climbed a route like this, where I'm surprised by every move, by the beauty of the granite formations, where the sheer variety of climbing, the natural environment and the beauty of the moves have made me shout out with joy for simply being there. Just like a great film that keeps you glued to the chair right to the end, Jeef unfolds via a series of consequential pitches that resemble a plot, a story carved by the wind and water over centuries into this wonderful rock face.

As soon as you set off the journey begins, up a slab which requires delicate, unobvious moves right... You're higher than the pine trees when you enter the heart of the slab, trying to place your foot onto the only edge located at the height of your hands. I was starkly reminded of alpine slabs at this point... but then you reach the belay and get the chance to think of something else for a while.

The Leitmotif of the second pitch is a crack that comes and goes, that's here for a while and then disappears. At times the only thing that remains is a flared hole... at times is a vague corner, other times a good hold above which you have to mantle and get established with the peg somewhere below... The usual question begs... when I put my foot on it, will I manage to mantle it without the help of any hand holds? Or will I tumble off backwards? The crack ends below a roof pocketed with round holes, where fine balance gives way to strange contortions. When you finally place your feet into a tub of suspended granite you know you're at the second belay.

The crux of the route is a boulder section which might well be on a metre-high granite boulder. You need to caress a sloper and stand on a downwards pointing foothold at the same time. Coordination is the name of the game. As you step up you manage to reach a trunk of granite that miraculously juts out of the face and this leads to a series of torso-twisting cracks. A short corner is stopped short by a roof, this is climbed upside down, feet relying on friction. I've done at least a thousand of roofs like this but... it's quite incredible ... inside the roof, hidden, there are some big jugs! A layback crack is now climbed without any pro, one of those cracks you'd fill to the brim with Friends, but why ruin the magic of these moves? A series of inviting big pockets lead to a rounded hole in the middle of a Yosemiteesque rock face. We're lost, on pitch 3, in a sea of granite.

A sloping traverse ends with a move that makes you smile and unlocks the door to a textbook open corner. But much to your surprise you leave this and instead head to the arête to the left; holds beckon, how can you resist this flattering invitation? A slab, a trick and a juniper bush later and you're at the base of a leaning corner. Sit down and belay, it's time for a break.

A short, seemingly harmless crack gives a foretaste of the difficult art of climbing "off widths" and this is then quickly followed by a mix of slab moves and pumpy sections through the tafonata-lined roof and the smooth slab below. A stoney path leads into the juniper forest at the base of the orange-streaked overhang of this immense granite dome.

Now aseries of slopers lead not without difficulty leftwards towards the Gruyere tafoni... unreachable otherwise like the promised land... then it's done, the tune changes once again and you need to transform into a monkey, dancing between enormous, fragile pockets, threads weathered by the wind and time... When you get established onto the dark ledge you're within the mountain, protected by two large granite lips. You belay your partner and crawl towards the light, back to life... The erosion finishes on the elephant's forehead as the ropes hang freely in the void, moving slightly in the wind. You cling on to the final pockets and adventure up into the choppy sea of granite, towards the blue sky, which marks the horizon of this little journey ...