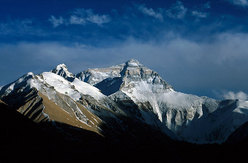 Chinese authorities have closed access to Everest and nearby Cho Oyu, suspending climbing permits until 10 May.

The surprising news is currently making headlines across the world and in practice means that until the end of the spring season it will be possible to climb Chomolunga from the south only, i.e. from Nepal, All expeditions who have programmed their ascent for these two mountains will now have to look for other alternatives.

Confirmation about this limitation arrived via fax yesterday to the Nepal Mountaineering Association. Sent by the China Tibet Mountaineering Association and reproduced entirely on www.mounteverest.net, it cites "concern of heavy climbing activities, crowded climbing routes and increasing environmental pressures will cause potential safety problems in Qomolangma areas (included Mt. Cho-Oyu) in this Spring season, the limited capacity of reception" as the main reasons why expeditions cannot be accepted.

According to www.mounteverest.net and many other sources though, the temporary "closure" of Mount Everest could be motivated by Chinese Authority concerns that the mountain might become an important opportunity for the "Free Tibet" movement, i.e. for those organisations who campaign for basic human rights and the liberation of Tibet.

The closure period coincides with the moment in which the flame of the 2008 Olympic Games should reach the top of the highest mountain in the world. A protest or a Tibetan, instead of a Chinese flag waving on the summit could well be the biggest nightmare of every organiser in Beijing.

The "closure" of these two mountains could be an indication therefore as to how important it is to present a harmonious image, albeit apparent, of these plateaus which are the birthplace of one of the oldest civilisations in the world. In particular now, during the Olympic year in which the world's eyes look east.

For more information about Tibet, the 1950 Chinese "liberation" and the violation of human rights, we recommend the following links:
www.savetibet.org
www.freetibet.org