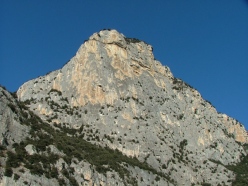 Highly demanding via ferrata which requires alpine experience and a good level of general fitness. The ferrata has an elevation gain of 400, and reaches an altitude of 970m by climbing a series of beautiful and steep limestone slabs which have rendered the Valle del Sarca famous throughout the world.

Take the A22 Modena - Brennero motorway and exit at Treno, follow signs for Madonna di Campiglio - Riva del Garda. At the village Sarche follow signs for Madonna di Campiglio, turn off right immediately after the roundabout (50m, opposite the Q8 petrol station) following signs for Via ferrata Rino Pisetta. Drive along the narrow road to the car park at "Bocciofila Toblino". The approach path starts from here.

This new start quickly joins the old path,  gaining height slowly at first and heading ENE, then it levels out and reaches a red and white arrow, which marks the start of a long scree gully which leads west to the rock face. The path bears left and continues diagonally SW, coasting beneath the base of the rock face to reach the obvious pillar and metal plaque which marks the start of the via ferrata at 570m.

The first section reveals the difficulties which lie in store: extremely steep rock faces with few footholds. Immediately after the start you can abandon the ferrata by taking the easy path which is equipped as well. The ferrata continues via slabs, corners and traverses and offers good places to rest in the shade. Before the end of the metal cables there is the book to sign, and then an easy scramble up very unstable rock leads to a final beautiful crest. Reach the summit of Cima Garzolet at 970m and the bench at the end of the ferrata.

From the bench head north and then keep left to reach the steep path. In some sections the path transforms into a dubious track and leads to dirt road. Take path No. 613 and continue past a small chapel. Continue leftwards to reach a sign which indicates the start of ferrata Pisetta. Walking down the flank of "Piccolo Dain", admire the steep east face and it's important climbs, and reach Sarche in circa 1.5 hours.

Full via ferrata kit (helmet, harness, set da ferrata). Do not forget gloves, while climbing shoes are recommended for the ascent.

This is a beautiful and difficult via ferrata, suitable for people who are fit and highly experienced. The ferrata faces SE - do not forget to bring plenty of water on sunny days.