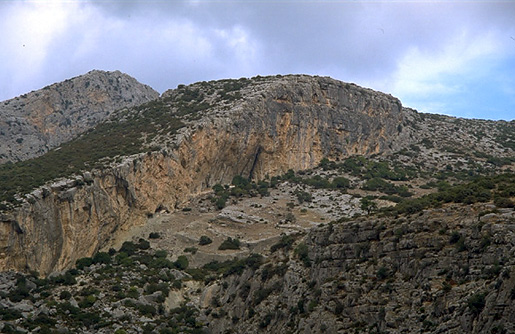 "Makinodromo" is situated on the eastern flank of the fantastic El Chorro gorge. This large overhanging limestone crag reaches a height of 80/100m and is most famous for "Lourdes", a legendary 30m 8a ideally suited for those in search of their first ever 8a on-sight.

"Mega Flash" has the same excellent rock and is characterised by long, slightly overhanging routes.

Drive north following the railway to where the road ends. Continue on foot through the railway tunnels on the eastern side of the gorge. After about 25 min a path leads right, before a bridge, uphill beneath the crags to Makinodromo. This is reached after a further 15/20 min.

Accommodation is not a problem in El Chorro. Visitors can choose from a campsite, the characteristic climbers' "refugio", the hotel next to the station and many welcoming "fincas".Finca la Campana, run by John and Christine, is friendly and highly recommended. e-mail el-chorro@el-chorro.com.

El Makinodromo is the highest sector in the valley. The path that leads to it passes two smaller sectors, El Invento and Los Bloques.

As it faces SE, climbing is not possible during the summer months, or during "siesta" as it becomes unbearably hot.